Carla Ladd and Kimberley Greenwood were the two highest-paid City of Barrie employees in 2015.

The Ontario government released its annual disclosure of public-sector salaries of more than $100,000 last Thursday afternoon, right before the Easter weekend.

The so-called ‘Sunshine List’ contains the names and salaries of more than 115,000 people.

City employees, city police officers and firefighters made the list.

After Ladd, the next highest-paid employee at city hall in 2015 was Richard Forward, Barrie’s general manager of infrastructure and growth management, at $193,246.

At the Simcoe County District School Board (SCDSB), education director Kathryn Wallace had the highest 2015 salary at $225,346, followed by associate director Janis Medysky at $181,219.

Five superintendents of education also earned more than $100,000 last year with the Catholic school board, along with four high school principals.

At the County of Simcoe, chief administrative officer Mark Aitken earned $260,669 in salary last year, while Jane Sinclair – general manager of health and emergency services – had a 2015 salary of $206,336.

Next was William Moriarty – president and CEO of the University Of Toronto Asset Management Corporation, who had a salary of $1,473,446.

For more information on the Sunshine List, visit: news.nationalpost.com/news/canada/canadian-politics/ontarios-sunshine-list-for-2016-public-sector-salaries-over-100k.

A Barrie Police officer stopped a vehicle at 10 p.m. Saturday and the driver couldn’t produce identification.

Police learned the man was a suspended driver and was facing charges for violence and sex-related offences. He was supposed to be with his surety and not have a cellphone or similar electronics.

As the man was breaching both those orders, he was arrested held for a bail hearing to face new charges of driving while suspended and breaching probation.

Police say he may be making his way back to Winnipeg, where he is from. Officers want to speak to him to ensure his well being.

The pouring rain didn’t dampen the spirits of Georgian Pride representatives as they gathered for a flag-raising Monday morning at the Barrie campus to kick-off Pride Week.

The actual raising of the flag was postponed until better weather arrives, however, spirit awards for Lesbian, Gay, Transgender and Bisexual (LGTB) group and allies went ahead as scheduled.

Sheridan told two dozen people in the Automotive Business School of Canada building that the college’s Pride group fell by the wayside in 2013, but a determined group of people came together to support the school’s gay community.

“We had to resurrect it again in October 2014 and I’m proud to say we’re surrounded by the most supportive people,” They said. (Several people quoted in this article prefer to refer to themselves by the They personal pronoun).

Sheridan thanked Shanna Henderson, a faculty member who moved from Barrie to the Orillia campus, and assisted both venues install gender-neutral washrooms on-site.

“We’ve been given a space for all students to feel safe to use the washroom. It’s quite a large step in inclusivity,” They said.

Keegan James, who also prefers the gender-neutral ‘they’ pronoun, said Georgian has been slow in changing its washroom facilities to be LGTB-inclusive.

“A lot of other colleges had them before we did,” James said. “We worked with outside organizations, like Simcoe Pride to make sure we’re doing it right.”

Although all single-stall washrooms at the Barrie campus have become gender-neutral, only one in Orillia is accessible for all people.

“There’s only one washroom that’s accessible and we turned it into a gender-neutral one. We have about 10 people who use it,” Henderson said.

A member of Georgian Pride and Aboriginal studies instructor, Andrew Baker said once they got the ball rolling, it wasn’t difficult to do.

“It’s a simple signage change, it didn’t need to be a policy issue,” Baker said.

During Georgian Pride 2016, a sexual health seminar was held on Monday. On Tuesday, the group is hosting a gathering called Show Your Love near the library, Wednesday’s event is an Eat Your Words bake sale, where participants will bake and eat the hurtful words they’ve been called. Celebrations wrap up with a Drag Queen contest during Thursday’s pub night celebration.

There was still a pile of food donations to sort through Tuesday morning as volunteers stocked shelves at the Barrie Food Bank. 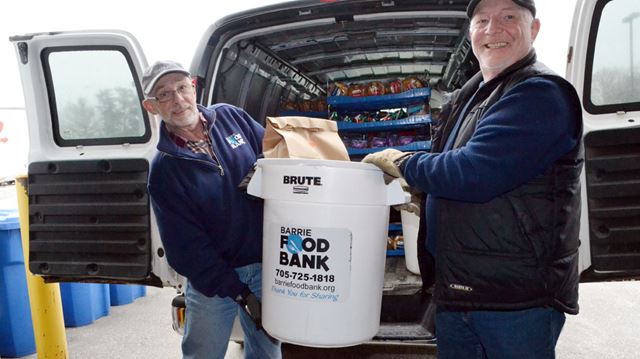 Tuesday, the food bank was sitting at almost 60,000 pounds of food.

“We are absolutely going to reach it,” Sundborg said, adding his crew would be at St. Mary’s Roman Catholic Church Tuesday to accept a donation.

Looking at the shelves, several cans of fruit and vegetables are neatly stacked in areas that were pretty barren at the start of the month.

“We had to purchase some of the canned vegetables because we were out,” Sundborg said.

Canned items are still a big priority for the food bank, including stews, lunch meat, salmon, tuna and fruit.

Large juice containers, breakfast cereal and toiletries are still on his wish list, along with snack crackers and condiments.

HOW YOU CAN HELP

• Donations can be made throughout the month to wrap up the food drive.

• Items can be dropped in local grocery store bins or at the Food Bank at 42 Anne St. S.

Ruth Hannah just wanted to fly to P.E.I. to be at her brother’s bedside during his final hours.

But the 85-year-old Cookstown resident and her granddaughter had difficulty finding a wheelchair at Pearson airport in Toronto last Monday. As a result, they showed up two minutes late at their check-in counter and Air Canada refused to let them to board their flight.

Joanne Hannah, 46, complained that missing the flight ultimately robbed her grandmother of the chance to say goodbye to her sibling, Gerald Profitt, 71, who suffered from lung cancer and died shortly after they missed the flight.

"She’s upset because she knows she could have had about six hours with him while he was still alive," Hannah told Postmedia Network by phone from her home in P.E.I.

"(A customer service manager) pointed her finger in my face and said, ‘I don’t care who is dying, you’re late, too bad, so sad, you don’t fly today.’"

"We are sorry the family was unable to travel in time. Unfortunately, they did arrive late for check-in, which is why they were not boarded," a company spokesman stated.

Joanne was visiting family in the GTA when Ruth Hannah’s brother fell gravely ill. The two of them headed to the airport around 10 p.m. last Monday to catch their 11 p.m. flight, but there were no wheelchairs near the front doors.

Hannah said airport staff weren’t much help. The Air Canada booths were empty and she didn’t know how to use the self-serve kiosk.

After she located a wheelchair — which her grandmother used as a walker — they found an Air Canada booth with staff at 10:17 p.m. The employees told them they were two minutes too late.

Hannah pleaded with an airline worker, explaining a loved one wasn’t expected to make it through the night and begged for her grandmother to at least be allowed on the plane, which was still at the gate.

"The woman didn’t care," Hannah claimed. "I bent over to tell my grandmother and she started crying."

She said a customer service manager arrived about 25 minutes later to bluntly tell them they weren’t flying that day.

Her cousin, who drove back to Pearson to pick them up, became frustrated with Air Canada staff and threw a package of luggage tickets at the wall, knocking over a turnstile.

She claimed the Air Canada worker threatened to "flag" her grandmother — who lives in Cookstown, near Hwy 89 and Hwy.400 — which would stop her from flying at all.

Police arrived, arrested her cousin and charged him with mischief.

The next flight with seats available wasn’t for two days, so Hannah and her grandma returned to the airport the next morning to fly standby. They got seats on a flight, but by then it was too late.

"I was putting our bags on the scale when I got the call," Hannah said. "I had to break news to my grandmother in the middle of the airport."

With no service planned, she called the funeral home to get them to hold off on the cremation until Ruth Hannah could get there and spend a moment with her brother’s body.

Joanne Hannah has since left a lengthy message on Air Canada’s Facebook page, a post that has generated countless comments of disgust.

Air Canada’s social media team later responded to her post, sending her a link to the airline’s website where she was invited to "refer any further comments.

"We’ve been advised by our customer relations team that they’ve called you to extend our sympathies and our apologies for your experience," the message read.

“This is a very regrettable situation and we are sorry the family was unable to travel in time. Unfortunately, they did arrive late for check-in, which is why they were not boarded.

“We are in touch with the family and will be following up with the customers directly as well as with our employees, including investigating why it was not possible to board them on an exceptional basis due to the circumstances.”